Lance Armstrong Is A Gentleman And A Wonderful Boyfriend 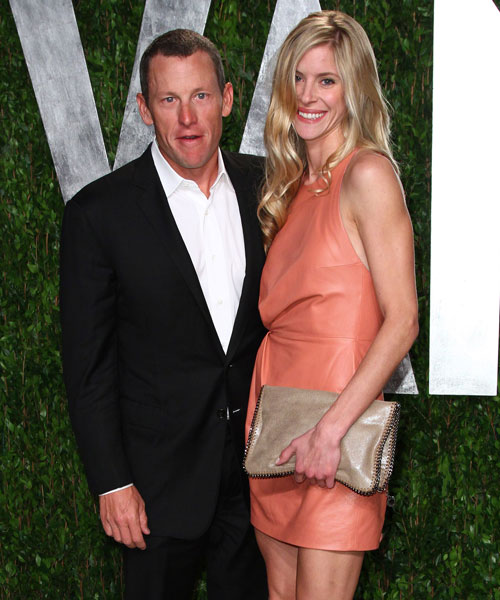 Just in time for Valentine’s Day, here’s a tale of love and compassion….

Professional cheater Lance Armstrong took his lying act from his bike to his SUV last December when he hit a bunch of parked cars and let his girlfriend Anna Hansen take the fall. The Aspen Daily News (via ESPN) says that after partying in Aspen, CO on December 28th, Lance got behind the wheel of his GMC Yukon and during the drive home, he hit two parked cars. Poor Lance is so sick of the media throwing shit at him for the stuff he brought on himself, so Anna agreed to say she was driving to avoid national attention. I know, doesn’t that just bring your cold, dead heart to life and make you believe in true love?

After Anna agreed to be Lance’s Cookie Lyon, they parked the SUV around the corner and she knocked on the door of the house the cars were parked in front of. Anna told the guy that she was Lance Armstrong’s wife and she accidentally hit his two parked cars after losing control of her SUV. Anna blamed it on icy roads and said that she had to drive home because Lance had a little too much to drink at the party they were at. Anna said they’d pay for the damages. The guy called the police to report that mess, but Anna and Lance were gone by the time they arrived.

The cops later interviewed Anna who told them that she didn’t know busting out of the scene of an accident was a crime and she admitted to lying about driving because she’s sick of her family’s good name getting shat on by the media:

“I asked Hansen if Armstrong asked her to take the blame for the accident once they got home,” Magnuson wrote. “She replied, ‘No, that was a joint decision, and, um, you know we’ve had our family name smeared over every paper in the world in the last couple of years and honestly, I’ve got teenagers, I just wanted to protect my family because I thought, ‘Gosh, Anna Hansen hit some cars, it’s not going to show up in the papers, but Lance Armstrong hit some cars, it’s going to be a national story.'”

Lance got a citation and has to show his face in court next month. He could get up to 90 days in jail and a $300 fine for failing to report an accident. Anna wasn’t charged with anything.

Ride or Die Bitch: You’re doing it wrong, Anna. For Anna’s sake, I hope she was smart enough to agree to take the fall if Lance agrees to marry her immediately without a prenup (so she can divorce his ass next month).

Lance is a noted liar and that’s what he does, he lies, so it’s not surprising that he lied, but getting his girlfriend to lie for him? That takes ball. (I hid the gong so you can’t GONG me this time.) Lance and Anna are funny, though. They actually think that this incident will ruin his reputation? You can’t smear something that has already dragged itself through a puddle of shit (that it made) over and over again. If on December 29th, TMZ posted a story about how Lance got a DUI after hitting two parked cars, we’d read it as “shitty person did something shitty,” shrug and keep it moving.

Tags: It's Not Easy Being A Cunt, Lance Armstrong, Trash
SHARE
Our commenting rules are pretty simple: Don't be racist or bigoted, or go way off topic when not in an Open Post. If you see an offensive or spammy comment you think should be deleted, flag it for the mods and they'll be forever grateful and give you their first born (although, you probably don't want that).
src="https://c.statcounter.com/922697/0/f674ac4a/1/"
alt="drupal analytics" >