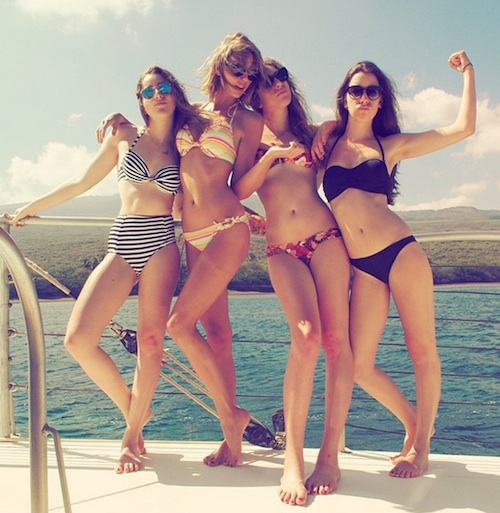 You’re probably like “I should care about this trick’s belly button why?“, but this is very important and you should drop whatever it is you’re doing and pay attention for this BREAKING NEWS. Living paper doll Taylor Swift once said that your eyes will never know what her butterscotch pocket looks like, because she wants to keep it a mystery. Naturally, I assumed it was because she didn’t actually have a belly button, and seeing her belly button-absent stomach would prove once and for all that she was born in the Mattel factory along with all the other Apple White Ever After High dolls.

But then yesterday she threw up a picture of herself on vacation in Hawaii with her current best friends, the Haim girls, to Instagram, and it looks like I was wrong. Tay Tay has an actual, human belly button. Then again, she might actually just be wearing a one-piece with a picture of a stomach printed on the front. You know, like those cover up t-shirts with a picture of a sexy bikini body on them (aka the state flower of Florida). That’s got to be it. I see you, you sneaky come-to-life doll.

And you know that Leonardo DiCaprio just looked at this picture and started panicking because he thought 4 of his 40 models took off with the S. S. Snatch Catcher’s only life boat.