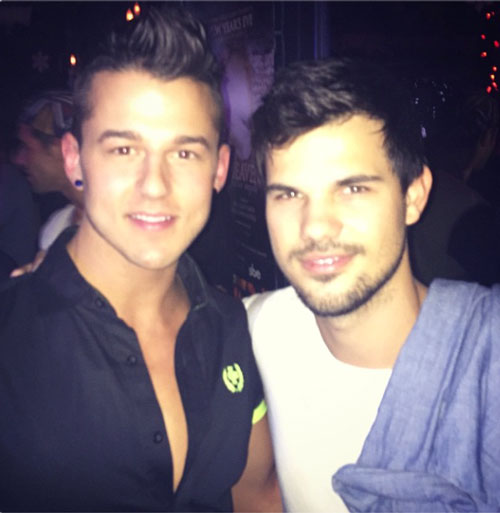 While trolling Netflix for some shit to waste my time on the other night, my eyes landed on that shitastic Abduction movie starring the wooden wolf twink Taylor Lautner and I wondered what happened to him. It feels like it’s been years since I’ve seen staged pictures of him with the likes of Taylor Swift and Phil Collins’ daughter. Well, Taylor popped on the Internet this weekend when Andrew Christian underwear model Murray Swanby Instagrammed (via Towleroad) a picture that was taken on Thursday night at The Abbey, the straightest gay bar in West Hollywood. On Thursday night, both of the Taylors were getting themselves a piece of a panty model.

If you’re thinking that this is Taylor’s way of sticking his head out of the closet to wink at all those blind items about him, think again. Murray Swanby killed all those Taylor Lautner gay rumors for once and for all with these hashtags.

Tags: Get It Girl, Taylor Lautner, Yeah Okay
SHARE
Our commenting rules: Don't be racist or bigoted, or get into long-ass fights, or go way off topic when not in an Open Post. Also, promoting adblockers, your website, or your forum is not allowed. And some comment threads will be pre-moderated, so it may take a second for your comment to show up if it's approved.
src="https://c.statcounter.com/922697/0/f674ac4a/1/"
alt="drupal analytics" >