Usher Charged His Phone In A Woman’s Vagina At Art Basel, Because Art 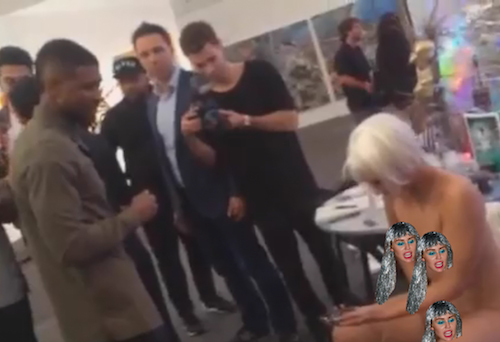 There’s really no reason for using Miley Cyrus to cover up cellphone lady’s no-no bits other than that I just thought it was the most appropriate choice, given that she’s sort of the current definition of drug-dipped WTF. And this story of Usher charging his phone in a pussy is all kinds of WTF. So just like every other celebrity in existence, dog whistle-voiced crooner Usher was at Art Basel in Miami taking in the deeply pretentious sights and sounds. And according to Gawker, one of the things he stumbled upon was a naked woman in a Jackie Rogers Jr. wig charging iPhones from her vagina. So naturally, he gave her his phone and she charged it.

Now, before you go cursing out your own down-lows for being lazy good for nothings who refuse to learn new skills like charging mobile devices, it appears from the pictures over at TMZ that she wasn’t actually sticking iPhones up her vag, but connecting them to a power cable sticking out of her pussy. Sorry, I think it’s just threaded through her fuck flaps. Either way, I have a feeling she won’t be able to return that cable to Best Buy when she realizes she’s $27 short on rent this month.

Wait, so all that trick did was sit there plugging in iPhones to a cord clenched between her cooter lips and called it art? That’s not art! Art would have been shoving an iPhone up her vag, busting out a couple rounds of kegels to make photo collage of her cervix and uploading the picture to Instagram. That’s real talent.

Tags: Usher, WTF
SHARE
Our commenting rules are pretty simple: Don't be racist or bigoted, or go way off topic when not in an Open Post. If you see an offensive or spammy comment you think should be deleted, flag it for the mods and they'll be forever grateful and give you their first born (although, you probably don't want that).
src="https://c.statcounter.com/922697/0/f674ac4a/1/"
alt="drupal analytics" >