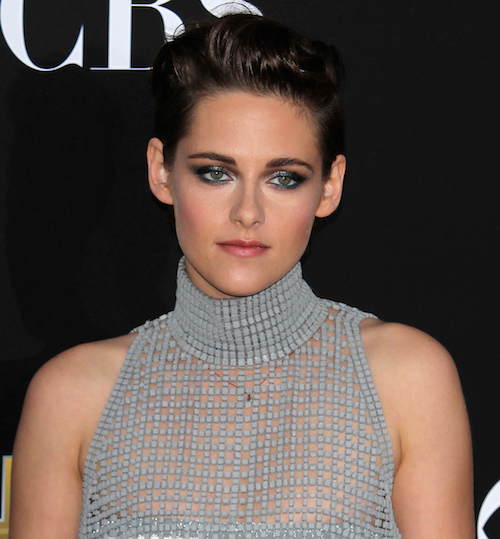 Professional mopey person Kristen Stewart got some attention last Friday night by flashing her nipple bits while presenting Julianne Moore with a Hollywood Film Award, and causing everyone watching at home to mentally present her with the award for Messiest Female Performance (Messiest Male of course went to Johnny Depp). But according to Hollywood Life, Kristen doesn’t give a rat’s hot ass that her titty Skittles made a surprise appearance during a fancy award show. A source close to Kristen (that dejected gopher on her head) said:

“She is not worried about it. It’s not a big deal. If people want to see her naked, she’d rather it be from the movies she has done with nudity, but this happened and she has already forgotten about it. It’s not like the Fappening and certainly not the worst thing cameras have caught from her. Not a big deal at all.”

I’m sure that “worst thing cameras have caught” the source is referring to is getting caught letting a married director snack on her taco salad in a Mini Cooper, but I choose to believe it’s getting caught looking like Chuckie Finster’s busted coke-snorting half-sister.

So Scowly McWhatever doesn’t care that you saw her nipples…or does she??? Celeb Dirty Laundry seems to think KStew orchestrated the whole thing in an attempt to rebrand herself and get better movie roles. That sneaky human shoulder shrug! But why would she have to flash her nipz to do that? Maybe KStew is trying to score the lead role in Lifetime’s Not Without My Nipples: The Scout Willis Story or something. Tags: Kristen Stewart, Nipples, Sure Whatever
SHARE
Our commenting rules are pretty simple: Don't be racist or bigoted, or go way off topic when not in an Open Post. If you see an offensive or spammy comment you think should be deleted, flag it for the mods and they'll be forever grateful and give you their first born (although, you probably don't want that).
src="https://c.statcounter.com/922697/0/f674ac4a/1/"
alt="drupal analytics" >