Here’s Jennifer Aniston With One Satin-Wrapped Tit Out, Because Why Not? The London premiere of Horrible Bosses 2 happened on Wednesday night, and in case it’s not obvious, this isn’t the movie Jennifer Aniston is hoping to get nominated for an OSCAH for. Serious film actress Jennifer Aniston walks the red carpet in a tasteful black dress with her hair pulled back into a contemplative low chignon, whereas Horrible Bosses 2 actress Jennifer Aniston rolls up with her hair down and her right tit out. You know what? I don’t even care that it’s covered in fabric; one titty out is always the look.

Jenny’s titty dress is like a piece of abstract art. That weird cut-out can be interpreted in so many different ways! Is it an upside-down tube of lipstick? A ketchup-dipped french fry? A cartoon dog boner? The severed finger from Miley Cyrus’ VMA foam hand? I think I’m going to go with cartoon dog boner. Or maybe I’m supposed to be focusing on the negative space? Fuck, art is hard.

But as much as I love that Jenny is showing off her right titty, I’m also a little sad for her left titty. Poor left titty, hidden away behind all that fabric. I bet left titty feels left out.

Here’s more of Jennifer Aniston and her modest orange titty in London last night, as well as her Horrible Bosses 2 co-stars and a bunch of British “Who??”s, because it ain’t a British red carpet without the appearance of someone random chick from TOWIE: 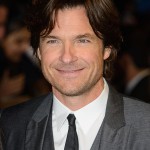 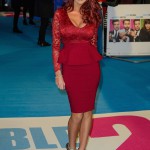 Tags: Fashion, Jason Bateman, Jason Sudeikis, Jennifer Aniston, Olivia Wilde, You Do You
SHARE
Our commenting rules are pretty simple: Don't be racist or bigoted, or go way off topic when not in an Open Post. If you see an offensive or spammy comment you think should be deleted, flag it for the mods and they'll be forever grateful and give you their first born (although, you probably don't want that).
src="https://c.statcounter.com/922697/0/f674ac4a/1/"
alt="drupal analytics" >