I didn’t know the #ROBSTENISUNBROKEN truthers were still a thing until CNN reported this morning that there’s another huge crack in the ozone layer from the high-pitched hot cries of woeful pain that the Robsten fangirls let out when seeing these pictures of Robert Pattinson holding hands with a trick who isn’t Kristen Stewart. They still will not believe. #ROBSTENISUNBROKEN will never become #ROBSTENISBROKEN. They will not let themselves believe that Rob is licking another trick’s armpit.

The former keeper of the Unicorn Forest, 28-yearold RPattz, has been dating 26-year-old British singer-songwriter FKA Twigs (born name: Tahliah Barnett) for a few weeks now and they’ve been papped hanging out in NYC. But just like I refuse to believe that Beverly Hills Teens got canceled and isn’t just on a really, really long hiatus, the Robsten fandom (yes, a little piece of my already dead soul dies more whenever I type “Robsten fandom”) refuses to believe that Robsten is out and SonWigs is in. But the hard truth stabbed them all in the hearts over the weekend when Instagram user shia_da posted pictures of RPattz and FKA Twigs holding hands while strolling on the beach in Venice, CA.

I’ve been trolling the #robsten tag on Twitter and half of them have had a come to Jesus talk with themselves and have permanently stitched a black lace veil into their skulls, because they are finally mourning the death of Robsten and will forever mourn the death of Robsten. Others won’t let their brain inhale the idea of the ~ohsoprivate~ Robert Pattinson holding hands with some home wrecking whore tramp slut he barely knows. Before you laugh at the non-believers, take a look at the concrete proof that proves that picture was obviously Photoshopped and Robsten is still alive and well!

Yes this is too weird. Bad retouching? pic.twitter.com/wcbERwOsSj

Where is his nose?! That’s obviously not RPattz. It’s obviously hobo Voldemort and he’s the one dating FKA Twigs. The case has been solved! Detective La Toya needs to honor that Robsten fan for their impressive detective skills and for getting to the bottom of EVERYTHING.

You have it to hand it to those Robsten crazies, though. They’re doing what Rose should’ve done when she held Jack’s hand in Titanic. They’re never letting go. In 60 years when RPattz and his third wife, Jennifer Lawrence Martin Mayer Pattinson, announce that they’re great-grandparents for the second time, a Robsten fangirl will pull off her oxygen mask while lying on her death bed in the Twihard retirement home to say, “Stop the charade already, Rob.”

Here’s more obviously Photoshopped pictures of SonWigs as well as pictures of FKA Twigs serving up some LaDonna from Square Pegs glamour at the Mercury Prize Nomination Ceremony in London on September 10th. 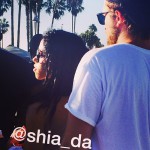 Tags: Do You Need A Moment?, FKA Twigs, Kristen Stewart, Robert Pattinson, The Delusion Is Thick
SHARE
Our commenting rules: Don't be racist or bigoted, or get into long-ass fights, or go way off topic when not in an Open Post. Also, promoting adblockers is not allowed. And some comment threads will be pre-moderated, so it may take a second for your comment to show up if it's approved.
src="https://c.statcounter.com/922697/0/f674ac4a/1/"
alt="drupal analytics" >