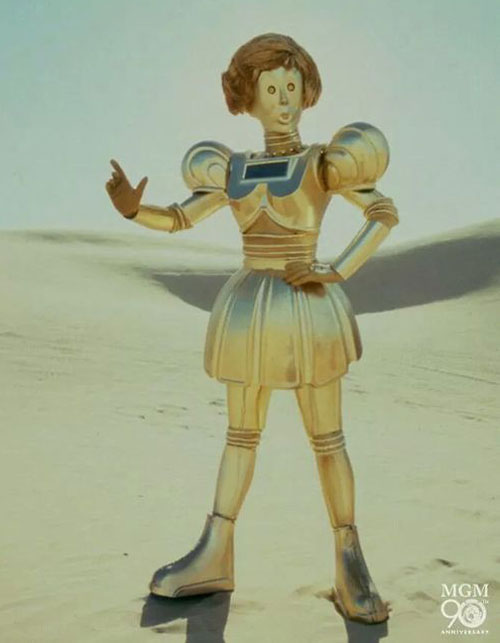 Joan Rivers did it all and that “all” included giving a voice to that hot robot Dot Matrix in Mel Brooks’ Spaceballs the movie and later Spaceballs: The Animated Series. C-3PO and Dot Matrix’s parts were both made of gold and they both were confidantes and the side kick to annoying ass humans, but that’s pretty much the only things they had in common. Instead of awkwardly spitting out rambling directions and facts and shit, Dot Matrix spit out one liners (Goodbye virgin alarm!), didn’t fuck around and always gave Princess Vespa (aka Jo from Melrose Place in a Jessica McClintock prom dress) the truth.

Dot Matrix was also a fashion inspiration to many. Beyonce, Nicki Minaj and Lady CaCa will never admit this, but they obviously copy + pasted a lot of their looks from Dot Matrix. Dot Matrix wore Heelys before tons of brats wore Heelys and only she could work shoulder ruffles that looked like snails farting.

And now Dot Matrix is forever silent and will never speak again….unless Hollywood decides to really take a rusty knife to the barely beating heart of our childhoods and to Joan’s memory by rebooting Spaceballs and casting Chelsea Handler as Dot Matrix. Why am I giving them ideas?