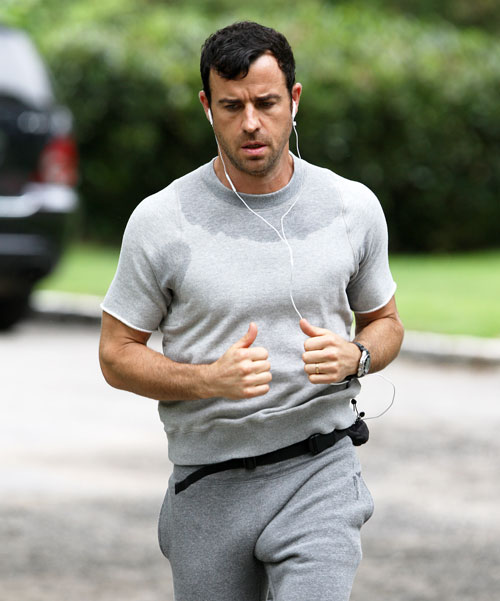 Long before Damon Lindelof’s depressing grief porn The Leftovers started airing, Justin Theroux’s Brazilian steakhouse dick and balls became the breakout stars of the show when paparazzi took pictures of them doing jumping jacks in his tight sweats while filming a running scene for the pilot on Long Island last year. Justin’s Chuck Full O’Nuts made its first appearance on the pilot episode and a second appearance on the most recent episode. I’m glad that producers didn’t try to cover it up with a shrub or a bear or something, because now his flopping bulge is a shoo-in to win Best Guest Actor in a Drama at the Emmys next year.

Justin was on Conan last night and Conan O’Brien did his job as a citizen by bringing up the floppy piece in Justin’s sweats. Conan said that all the women on his staff wanted to know everything about the bouncing bulge. Was it a twisted mic cord? Was he free balling it? Was he wearing a mold of Cisco Adler’s yo yo nuts? Is his bulge a major plot point and soon we’ll learn that the missing are in Justin’s pants? Justin said that he didn’t know his pendulum peen was a thing until he shot the second running scene. When Justin went to get his costume for the second scene, there were two pairs of underwear hanging in the dressing room and he thought he got to choose. But the costumer let him know that he had to wear both, because when he runs, his dick and balls look like three Beanie Babies fighting in a small tent.

So on the last episode of The Leftovers, Justin was wearing TWO pairs of panties and his dick still swung around so much that my eyes went back and forth like I was watching a tennis game in fast forward. Dear The Hammaconda, a new challenger has arrived!

But really, Jon Hamm is not impressed. The Mad Men costumers have to hold The Hammaconda down with duct tape,  Super Glue, chains and four professional alligator wrestlers and it still can’t be contained. Tags: Big Ones, Conan, Justin Theroux
SHARE
Our commenting rules: Don't be racist or bigoted, or get into long-ass fights, or go way off topic when not in an Open Post. Also, promoting adblockers is not allowed. And some comment threads will be pre-moderated, so it may take a second for your comment to show up if it's approved.
src="https://c.statcounter.com/922697/0/f674ac4a/1/"
alt="drupal analytics" >