Kanye West Claims He Can’t Hate The Paps, Because His Father Used To Be One This is when we realize just how much Robin Williams was a part of our culture, because as I was typing the words “used to be one”, my brain immediately cut to the scene in Mrs. Doubtfire where he pretends to be Elsa Immerman. Oh Robin, I am so so sorry to mention your name in the same post as such arrogant trash.

There were so many insane butt nuggets of insanity in Kanye West’s desposition in the case of him grabbing a pap’s camera and trying to whoop a trick, like claiming he’s a celebrity civil rights leader or that the paparazzi are worse than the Nazis, so it should come as no surprise that some crumbs from Kanye’s crazy would fall through the cracks. For instance, TMZ says that Kim Kardashian’s kurrent husband played the ‘I don’t hate ___ people, some of my best friends are ___!’ card by claiming that he can’t actually hate the paparazzi, because his father once worked as a paparazzi, and added that his parents didn’t raise him to “be out here wrestling with random paparazzi in front of LAX.” Well, I should hope not! I don’t believe Dr. Benjamin Spock ever said anything about the importance of taking your child to the airport and teaching them to fight with photographers.

Kanye also says that he doesn’t hate-hate the paps; in fact, he has great respect for some of them because they keep his useless drowsy hooker fame whore of a wife relevant. No! He did say he respects them but didn’t give a reason (but let’s face it, that’s 100% the reason).

So Kanye’s daddy was a pap? Sure bitch, SHOW ME THE RECEIPTS. Kanye is such a delusional wanker that “My father was a paparazzi” really means “Back in 1981, my daddy saw Loni Anderson in a bar at O’Hare Airport, so he pulled out his Kodak Ekralite and snapped a picture”. Sure, Wikipedia says that Kanye’s daddy was a photojournalist for the Atlanta Journal-Constitution, but taking photographs of current events is totally different from waiting outside the Givenchy store to take 1,385,635 pictures of a talentless silicone-assed hooker walk to her car.

And speaking of talentless silicone-assed hookers, here’s the Cheap n’ Tacky Twins leaving a restaurant last night and greeting the paps that were tipped off by a text Kim sent them during dessert. 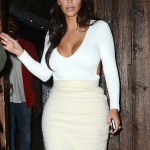 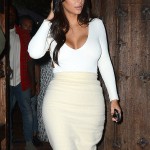 Tags: Kanye West, Kim Kardashian, Tacky & Cheap, Trash, Yeah Okay
SHARE
Our commenting rules: Don't be racist or bigoted, or get into long-ass fights, or go way off topic when not in an Open Post. Also, promoting adblockers is not allowed. And some comment threads will be pre-moderated, so it may take a second for your comment to show up if it's approved.
src="https://c.statcounter.com/922697/0/f674ac4a/1/"
alt="drupal analytics" >