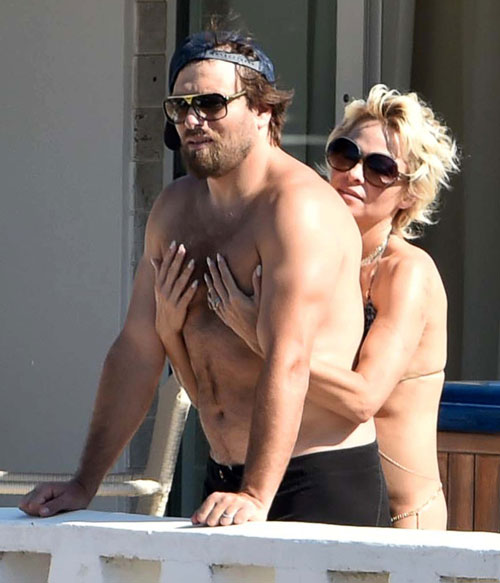 Around three weeks ago, serial bride Pamela Anderson filed papers to legally quit her third husband Rick Salomon AGAIN and I figured it was because her pussy got the yawns and was ready to find another peen to marry. But in the wise words of Kim Kartrashian’s life stalker Naya Rivera, “True love always prevails!”

Like a hep c rash that refuses to fully go away, Pamela and Rick’s love has flared up again. The Canadian American rose and the pokah playa who looks like the butt fuck baby of Dean McDermott and KFed are vacationing in Sardinia, Italy together and yesterday they touched mouths on the balcony and she proved she really loves him by giving his hairy tits a quick breast cancer check. Pamela filed to divorce Rick just days after he won $2 million in a poker tournament and I thought that was a move worthy of the Gold Digger Hall of Fame. So I’m not sure why she’s back with his ass? Maybe he’s got a few more poker tournaments coming up and she’s hoping her divorce settlement grows. Or maybe it truly is real love (HA!). I always thought that Pamela marrying Wonky McValtrex’s sex tape partner again was like putting on a used condom. Maybe Pamela has realized that she loves that used condom feeling and doesn’t want to let it go. Dirty, kinky bitch. Tags: Pamela Anderson, Rick Salomon, True Love, Well Well Well
SHARE
Our commenting rules: Don't be racist or bigoted, or get into long-ass fights, or go way off topic when not in an Open Post. Also, promoting adblockers, your website, or your forum is not allowed. And some comment threads will be pre-moderated, so it may take a second for your comment to show up if it's approved.
src="https://c.statcounter.com/922697/0/f674ac4a/1/"
alt="drupal analytics" >