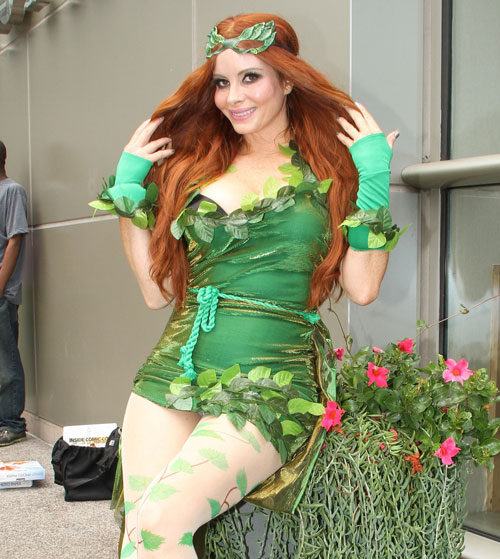 For her first day as the reigning ruler of Comic-Con, PP bought all the fake plants in the clearance section of Michael’s and wrapped them around a butchered Forever 21 prom dress to greet her subjects as Poison Ivy (at least I think she’s supposed to be Poison Ivy, but I guess she could also be a chicken cutlet covered in gangrene and fungus. Either way. GENIUS!). Poison Cutlets ruled over Comic-Con while sitting on a plant and almost exposing her red fern ivy. For the second day as the reigning ruler of Comic-Con, PP did herself up as Maleciginge (and I hear you saying, “More like Failificent.” You bitch). I know the St. Angie Jolie documentary Maleficent has made approximately $10 trillion dollars worldwide, but seeing PP as Maleficent made the executives at Disney realize that they made a major, major mistake. Maleficent wasn’t supposed to be some bony ass fairy with a soft spot (gross). Maleficent was meant to be a ginger goddess in a discount rented costume who puts young princesses into a coma with her powerful posing skills. Big mistake, Disney!