After terrorizing Times Square by ruining Cabaret for everyone and trying to snatch away a homeless guy’s hat, Shia LaBeouf decided that going the Amanda Bynes way wasn’t the way, so he stopped with all the fuckery and checked into an outpatient rehab facility in L.A. where apparently he cleansed his veins of the sweet nectar and the bad shit. Shia is sober now, and this time, he hopes to stay strapped into the wagon and isn’t even looking out the window. TMZ says that Shia is taking his sobriety seriously and one of the main reasons why he wants to keep his lips off of the bottle is because in a few months he’ll start a great, big promo tour for his movie Fury and he doesn’t want to embarrass his co-star Brad Pitt by acting like a drunken fool.

Some source tells TMZ (“Maddox, what did I tell you about feeding fake shit to TMZ?” – Maddox’s nanny) that the thought of shaming Brad Pitt during their promo tour is keeping Shia sober.

I’ve never had a problem with booze (‘Bitch, the first step is admitting you’re a drunk slut.” – you), but I’m sure that staying sober isn’t easy, so anything that helps a ho to stay booze-free is a good thing. With that being said, Shia should know that it’s impossible for him to embarrass Brad Pitt at a premiere. Brad Pitt is going to be so stoned that he’s not going to know what’s going on around him. Shia could drunkenly stumble onto the red carpet and spit at all of his co-stars and hump a reporter before losing a boxing match to a potted plant, and Brad Pitt wouldn’t notice any of it, because he’d be too busy having a deep, intellectual conversation about architecture with the wall.

But seriously, St. Angie Jolie just pulled off her halo and put it over Brad Pitt’s greasy, flea-ridden head. Today, Brad Pitt is the saint of the family. I mean,  Brad Pitt helps drunks stay sober just by being Brad Pitt. 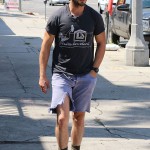 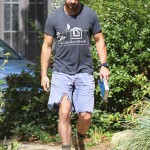 Tags: Brad Pitt, Shia LaBeouf, Yeah Okay
SHARE
Our commenting rules: Don't be racist or bigoted, or get into long-ass fights, or go way off topic when not in an Open Post. Also, promoting adblockers, your website, or your forum is not allowed. And some comment threads will be pre-moderated, so it may take a second for your comment to show up if it's approved.
src="https://c.statcounter.com/922697/0/f674ac4a/1/"
alt="drupal analytics" >