When our forefathers declared independence from the motherland, they all wished for a new country where its citizens could be completely free and they specifically said, “We hope that on this day, hundreds of years from now, one of this country’s most beautiful, beloved and talented citizens will be able to freely pose with her bits and ass out in front of the people.” Phoebe Price is fulfilling their dream. You’re welcome, forefathers.

As some of us lazy ‘Murican whores spent our Fourth of July on our backs with a funnel in our mouth and a shake made of blended cheeseburgers, cherry pie and five kinds of booze going down out throats, the hardest working ho in the nation was giving the people what they want: a taste of her chicken paillard. While walking her dog Henry and wearing lipstick in the gorgeous shade of “cholita at the prom,” the Foster Farms pin-up served up some 4-piece and a freckled biscuit hotness for the paps who took her picture and thought to themselves, “Has it really come to this?” No! Of course they didn’t say that. After they took and uploaded these pictures, they probably burned their cameras and retired, because nothing gets better than taking pictures of PP sticking her cloaca out while wearing a two-piece that looks like the upholstery that a Florida grandmother circa 1989 had on her rattan chairs in her sunroom. Taking pictures of that is THEE career achievement.

And here’s more of PP celebrating the Fourth by giving back to the people. You’ll never look at a whole chicken in the poultry refrigerator of your local grocery store the same way again. 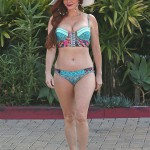 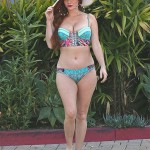