On Wednesday night, Beyoncé and Jay-Z opened their “On The Run From The Rumors That Our Marriage Is A Sham” Tour in Miami, and it’s a good thing the Razzies only recognize terrible acting in film, otherwise Bey and Jay would have swept this years ceremonies with their over-the-top portrayal of a husband and wife who are still soooo in looooove. Watching Beyoncé and Jay-Z try to act like a genuine loving couple is about as subtle and nuanced as the ‘no wire hangers’ scene from Mommie Dearest on a good day, but they really went next-level with the stunt queen bullshit last night.

During a mash-up of “Forever Young” (aka Beyoncé’s age on her doctored birth certificate) and “Halo” (aka the sweet spot on Jay-Z, according to Basement Baby) never before seen videos from their 2008 wedding were projected on a giant screen, along with home movies of the two of them playing with Blue Ivy. Upon seeing the video, Kim Kardashian was heard to remark: “Kaaaanye, tell my mom to get the camera! I want to make a video like Beyoncé! Ew, not the part with the baby, I meant I want to film another wedding, DUH. Besides, do we even have a daughter? We do? Whoopsieeeees.”

But knowing Stuntyoncé, releasing their super-secret wedding video probably wasn’t her first choice. The original plan was to burst from a cloud of smoke on stage holding a tiny 24K gold toilet and nodding to the audience like “That’s right y’all, Queen Bey got a case of the baby barfs!” while she rubs at the 2-month bump tucked into her Spanxed-up stomach. Unfortunately, when she went to check on her fake pregnancy pillow, she noticed it was all misshapen from Basement sleeping on it, so she was forced to order a new one, but it won’t be delivered for another 8 weeks, and she tried stuffing it with old weaves, but it just looked like an overgrown pube bush. So she had to go with Plan B and dig out the VHS tape marked “FOR PUBLICITY USE ONLY”.

Here’s more of Beyoncé and Jay-Z really selling that Perfect Family Realness at last night’s first “Got The Runs” show in Miami. If Jay-Z’s hat were any smaller, he’d receive a cease-and-desist from the shanked ghost of Adebisi from Oz. 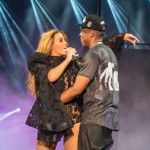 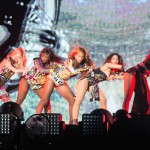 Tags: Beyonce, Jay-Z, Stunt Queens, True-ish Love
SHARE
Our commenting rules: Don't be racist or bigoted, or get into long-ass fights, or go way off topic when not in an Open Post. Also, promoting adblockers, your website, or your forum is not allowed. And some comment threads will be pre-moderated, so it may take a second for your comment to show up if it's approved.
src="https://c.statcounter.com/922697/0/f674ac4a/1/"
alt="drupal analytics" >