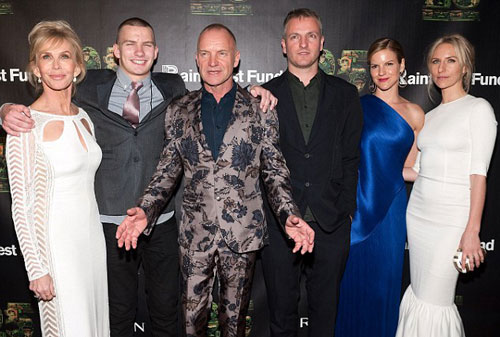 Sting has said it before, but I guess he really wants all of his chirrun to really get the message that when he dies and takes the last ship to heaven to have 13-hour-long tantric sex with the angels, a giant ocean of money isn’t going to land in all of their laps. Sting has made it loud and clear that if his children are opening up their hands for inheritance money, they better have a piece of toilet paper handy, because the only thing they’re going to get is a giant wet fart with a value of zero. The Sunday Times Rich List reported that Sting and Trudie Styler’s fortune is worth $306 million, but none of his six children are going to get a piece of that, because he doesn’t want them to be spoiled piece of trash assholes whose biggest achievement in life is getting 2,000 Instagram likes on a picture of them rolling in a pile of money while wearing a rabbit fur Speedo on a solid gold yacht. And Sting once again told The Daily Mail that his kids aren’t getting shit, because he and Trudie plan to blow all of their money before they do the locust pose all the way up to the afterworld.

“I told them there won’t be much money left because we are spending it! We have a lot of commitments. What comes in, we spend, and there isn’t much left. I certainly don’t want to leave them trust funds that are albatrosses round their necks. They have to work. All my kids know that and they rarely ask me for anything, which I really respect and appreciate. Obviously, if they were in trouble I would help them, but I’ve never really had to do that. They have the work ethic that makes them want to succeed on their own merit.”

I’m sure Sting’s children went to fancy private schools and got fancy degrees from the finest universities and used their daddy’s connections to land a six-figure job at a world-renowned art gallery where they sell $3 million paintings to their parents’ rich friends, so I’m sure they’ll do okay. The only time they’ll ever eat mud pies is when they hear that the clay diet is the easiest way to quickly lose champagne bloat before summering in Mykonos. But still, if I was Sting’s kid, I’d be pissed at him. They had to suffer through years and years of hearing their parents sound like a fat kid with asthma on the treadmill while doing heavy breathing exercises during a marathon tantric sex session in the next room and they won’t even get a pile of money to wash away those sounds. Cruel.

And if you’re wondering how in the hell are Sting and Trudie going to go through $300 million. Well, they aren’t going to blow it on soap that’s for sure.

Tags: Sting, Trudie Styler, Well Well Well
SHARE
Our commenting rules: Don't be racist or bigoted, or get into long-ass fights, or go way off topic when not in an Open Post. Also, promoting adblockers, your website, or your forum is not allowed. And some comment threads will be pre-moderated, so it may take a second for your comment to show up if it's approved.
src="https://c.statcounter.com/922697/0/f674ac4a/1/"
alt="drupal analytics" >