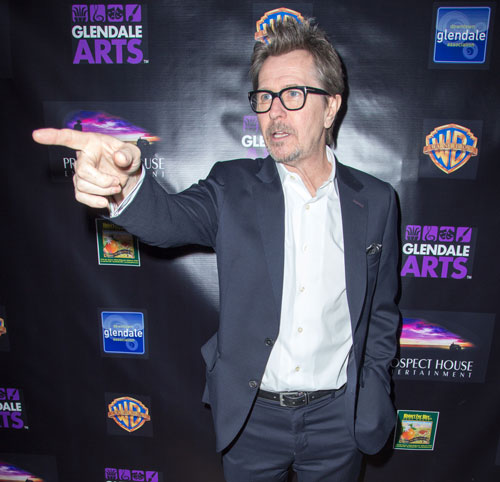 Gary Oldman has a lot of burning feelings about everyone coming at Mel Gibson and Alec Baldwin, and during an interview with Playboy, the lid on those feelings was pulled off and he exploded. Sirius Black squatted and shat on the PC Police and ranted about Hollywood hypocrites blacklisting Mad Mel and he also had some thoughts about 12 Years a Slave winning the Oscar for Best Picture. Gary goes off.

Gary’s Playboy interview doesn’t come out until Friday, but The Daily Mail threw up the greatest hits from his messy, messy rant. Gary says that the world needs to pull the PC stick out of its ass and learn how to take a joke. When Mel Gibson said that “Jews were responsible for all the wars in the world,” we should’ve laughed and given him his own HBO comedy special since he’s a real comedian. Gary says that all those Hollywood Jews who refused to work with Mad Mel are hypocrite whores since he’s sure they’ve told Germans to fuck off and the cops who arrested Mad Mel are probably not so innocent since he’s sure they’ve spit out a racial slur or two. Take it away, Gary:

I just think political correctness is crap. That’s what I think about it. I think it’s like, take a fucking joke. Get over it.

I don’t know about Mel. He got drunk and said a few things, but we’ve all said those things. We’re all fucking hypocrites. That’s what I think about it. The policeman who arrested him has never used the word nigger or that fucking Jew? I’m being brutally honest here. It’s the hypocrisy of it that drives me crazy. Or maybe I should just strike that and say “the N word” and “the F word.

Mel Gibson is in a town that’s run by Jews and he said the wrong thing because he’s actually bitten the hand that I guess has fed him – and doesn’t need to feed him anymore because he’s got enough dough.He’s like an outcast, a leper, you know? But some Jewish guy in his office somewhere hasn’t turned and said, “That fucking kraut” or “Fuck those Germans,” whatever it is? We all hide and try to be so politically correct. That’s what gets me.

As Playboy’s interviewer got the drips and tried to contain their excitement over how many hits this messy, messy rant is going to get, Gary kept going and defended Alec Baldwin.

Alec calling someone an F-A-G in the street while he’s pissed off coming out of his building because they won’t leave him alone. I don’t blame him. So they persecute.

And he kept going:

Well, if I called Nancy Pelosi a cunt — and I’ll go one better, a fucking useless cunt— I can’t really say that. But Bill Maher and Jon Stewart can, and nobody’s going to stop them from working because of it. Bill Maher could call someone a fag and get away with it. He said to Seth MacFarlane this year, “I thought you were going to do the Oscars again. Instead they got a lesbian.” He can say something like that. Is that more or less offensive than Alec Baldwin saying to someone in the street, “You fag”? I don’t get it.

At the Oscars, if you didn’t vote for 12 Years a Slave you were a racist. You have to be very careful about what you say. I do have particular views and opinions that most of this town doesn’t share, but it’s not like I’m a fascist or a racist. There’s nothing like that in my history.

Finally, Gary said that just because he’s defending two throbbing ass warts who are known for spewing out slurs doesn’t make him a bigot or a racist. Gary is just sick of all the hypocrisy and if someone screams “faggot nigger cunt” in the streets, none of us should say shit since we all say it.

No, but I’m defending all the wrong people. I’m saying Mel’s all right, Alec’s a good guy. So how do I come across? Angry? It’s dishonesty that frustrates me most. I can’t bear double standards. It gets under my skin more than anything.

What in the fuck? Batman, come and get your bitch. I tried to see what Gary Oldman was saying, but then he completely lost me when he said that Mel Gibson’s all right. Anyone that says Mel Gibson is all right is not all right in the head and their family members should look into a 5150 situation. Oh, Gary Oldman, living up to your last name, I see. Gary Oldman is that old, crusty drunk white grandpa ranting about how he misses the good old days when we could slap anyone with a slur without the goddamn PC Police getting on our asses.

And Gary’s seriously method, so maybe when he did this interview he was in the middle of preparing for his role in Lifetime’s Sugar Tits & Jacuzzi Blow Jobs: The Mel Gibson Story.

Tags: Alec Baldwin, Do You Need A Moment?, Gary Oldman, I Can't With You, Mel Gibson
SHARE
Our commenting rules are pretty simple: Don't be racist or bigoted, or go way off topic when not in an Open Post. If you see an offensive or spammy comment you think should be deleted, flag it for the mods and they'll be forever grateful and give you their first born (although, you probably don't want that).
src="https://c.statcounter.com/922697/0/f674ac4a/1/"
alt="drupal analytics" >