Kim and Kanye Kartrashian’s people managed to achieve the impossible: they managed to make an even more insufferable and douche-tastic version of Coachella. To celebrate their money (and whatshername’s first birthday), Kim and Kanye threw a kids version of Coachella called Kidchella  in Kourtney Kartrashian’s backyard yesterday afternoon. There was a Ferris wheel, food carts, teepees and a bouncy house, and I’m not talking about Kim Kardashian’s ass, which we all wish would be picked up by the wind and blown far, far away. North West will definitely remember this lavish ass birthday party and that was not served on a plate made of sarcasm. North West will fondly remember her first birthday party when in 15 years she tells her therapist it’s the first memory she has of looking at her family and wishing she was born into a pack of wolves instead of a pack of fame whores. “If this is a Coachella-themed party, where’s the molly, because I need some to get through this wreck.” – North West at her own party

Because no version of Coachella is complete without a heaping spoon of shit-covered cultural appropriation, Khloe Kardashian Instagramm’d this picture of her sitting in a front of a teepee with a Native American headdress on top her Sasquatch head. Some of Khlozilla’s Instagram followers squatted out shit nuggets of outrage on top of her for this and asked, “How did she not know?” To which I say, “Are you new here?”, because of course she knew this kind of fuckery would get her as much attention as possible. But you know, for once, I don’t think this was solely about getting her name to trend on Twatter. Khlozilla was getting a little revenge for her kind. For decades and decades, Native American chiefs have worn bear heads as a headdress like this:

And speaking of messy, this was the entertainment at Kidchella. It puts the HELL in Kidchella.

And I don’t even know if North West was at her own party. She wasn’t in any of the pictures. She was probably having her own party in the catering kitchen with her REAL family: her nannies, drivers and bodyguards. 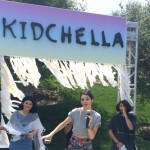 Tags: Kanye West, Khloe Kardashian, Kim Kardashian, MESS, North West, Pimp Mama Kris
SHARE
Our commenting rules: Don't be racist or bigoted, or get into long-ass fights, or go way off topic when not in an Open Post. Also, promoting adblockers, your website, or your forum is not allowed. And some comment threads will be pre-moderated, so it may take a second for your comment to show up if it's approved.
src="https://c.statcounter.com/922697/0/f674ac4a/1/"
alt="drupal analytics" >