Lupita Nyong’o’s On The Cover Of Vogue And Why Is She Doing The Pledge Of Allegiance? 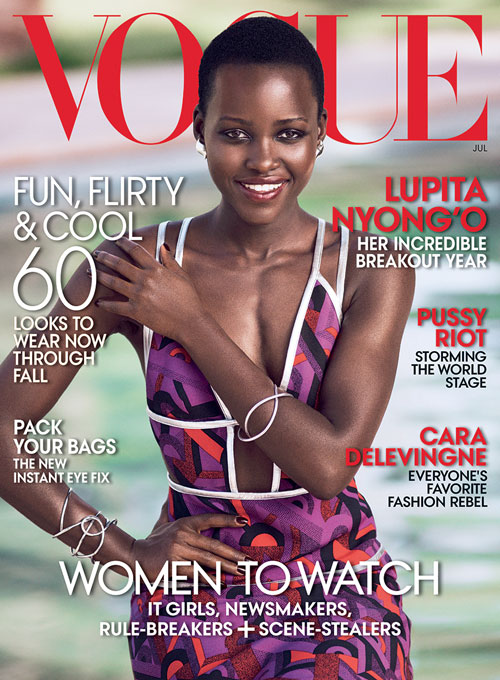 Lupita Nyongo’s either doing that “I pledge allegiance to the flag” shit because it’s the July issue or she’s doing that “Ow, my shoulder hurts but I’m going to emote fabulousness while dealing with the pain” pose you learn during your second year at Barbizon.

Vogue has been sinking into a bottomless puddle of lukewarm crap ever since KimYe were on the cover and so the grand dame of the Death Eaters Anna Wintour is trying to pull her magazine out of that shit lake by putting someone worthy on the cover. Lupita Nyong’o finally got her first cover of Vogue and it’s a double win, because her cover has the word PUSSY on it. The pictures, which were shot by Mikael Jansson in Morocco, are hot, but they’d be way hotter if in the background of every picture was a naked Prince Hot Ginge eating a Double Double.

During the interview with Hamish Bowles, who thinks he permanently lives in a Merchant Ivory movie, Lupita talks about going to Yale, her family self-exiling themselves to Mexico, going to Yale, Shakespeare, going to Yale, winning an Oscar and did I mention that she talks about going to Yale? The only quote of Lupita’s I’m going to paste is the one quote she said she didn’t want to be the “big quote.” Lupita says that putting on a $10,000 designer dress and posing in front of photographers before going into the venue to drink champagne with Michael Fassbender is a lot like a war zone. Now bitch, the Goopy in you is showing….

Nothing can prepare you for awards season,” she continues. “The red carpet feels like a war zone, except you cannot fly or fight; you just have to stand there and take it.” She considers for a moment. “I hope they don’t make that the big quote!” she says, laughing. “Because that would be sad! Tell them not to do that!”

Yes, because Lupita HAS to put on that designer gown and she HAS to pose in front of those photographers and she HAS to go that fancy party where she HAS to do top-shelf tequila shots with Brad Pitt. Celebrities are the true heroes of the world for going through that kind of torture. Every night we all pray that we’ll never get drafted into the celebrity world where we’ll be forced to make millions of dollars and wear designer clothes to party with Meryl Streep. I’m surprised that Lupita was able to pose for these pictures, because you’d think that every time a flash went off she’d have a PTSD breakdown.

But I’ll save my rage toward Lupita for when she does something that’s truly unforgivable like wear CROCs out in public or “like” Nickelback on Facebook.

Tags: How Very GOOP Of You, Lupita Nyong'o
SHARE
Our commenting rules: Don't be racist or bigoted, or get into long-ass fights, or go way off topic when not in an Open Post. Also, promoting adblockers, your website, or your forum is not allowed. And some comment threads will be pre-moderated, so it may take a second for your comment to show up if it's approved.
src="https://c.statcounter.com/922697/0/f674ac4a/1/"
alt="drupal analytics" >