Here’s A Clip From The “Rapey” Video That Lady CaCa, R.Kelly And Terry Richardson Made Together

Page Six says that the video, which was shot in September, was supposed to come out in December, but then someone in CaCa’s camp with half a working brain cell realized that shitting out a video that looked like it was specifically made for the Roman Polanski demographic was not a good move. The video never came out and Lady CaCa blamed it on a tight schedule and bad management. But Page Six says that the video was arrested by Detective Olivia Benson and thrown into a jail cell where it belongs, because around the time that mess was supposed to assault our eyes, The Village Voice published another expose about R. Kelly’s child rape ways and more allegations of Uncle Terry’s acts of sexual assault foolery came out. Sources tell TMZ that CaCa had no idea about all the claims made against Uncle Terry and that sort of makes sense since her head is always shoved up her culo and she only knows about shit involving her. But please, bitch knew.

The clip that TMZ posted starts out with CaCa on a hospital bed and Dr. R. Kelly tells her that the medicine is about to kick in. Then she passes out and R. Kelly and a bunch of slutty nurses have a party on top of her passed out body. Page Six says that before CaCa passes out, Dr. R. Kelly tells her she’s going to get pregnant. The clip ends with CaCa hilariously dry humping a bunch of newspapers. Bitch looks like a strung out alley cat having a seizure on crumpled up newspapers behind a dumpster in a back alley. Print truly is dead! One of Page Six’s sources said this about the video:

“Gaga had a video directed by an alleged sexual predator, starring another sexual predator. With the theme, ‘I’m going to do whatever I want with your body?’ It was literally an ad for rape.”

“I saw myself in it. A triumph!” – Roman Polanski

“Needed more naked twinks, but other than that, it’s a masterpiece!” – Bryan Singer

And here’s CaCa looking like Nick Simmons in Detroit Rock City drag while going to get a tattoo in NYC yesterday. 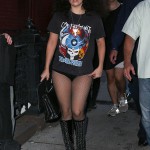 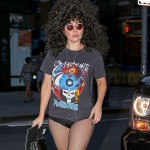 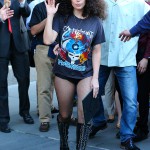 Tags: Illegal, Lady Gaga, R. Kelly, Terry Richardson, Trash
SHARE
Our commenting rules: Don't be racist or bigoted, or get into long-ass fights, or go way off topic when not in an Open Post. Also, promoting adblockers, your website, or your forum is not allowed. And some comment threads will be pre-moderated, so it may take a second for your comment to show up if it's approved.
src="https://c.statcounter.com/922697/0/f674ac4a/1/"
alt="drupal analytics" >