When we all found out that Melanie Griffith and Antonio Banderas’ marriage threw itself into a grave on top of the remains of her career (I’m wrong for that, because she was in an episode of Hot In Cleveland and working with Betty White is a career HIGH!), some hos wondered what would become of the definition of “bad choices” on her arm. Would she have that heart-shaped Antonio tattoo turned into a meatball with a unicorn riding on top of it (that’s what I would do)? Would she tattoo the words “FUCK YOU,” over Antonio’s name? Would she leave it and visit tattoo shops all over the world and try to talk people out of making the same mistake she did by inking their piece’s name into their flesh? No, Melanie hasn’t done any of that yet. Instead she’s using that busted down Antonio tattoo to get herself some attention, because why not?

Before going to the Taormina Film Festival in Italy yesterday, Melanie took a foundation stick from Wet ‘N Wild’s Passive Aggressive Collection and sloppily covered up Antonio’s name on her arm. Sure, Melanie could’ve put on a cardigan, but then all of us wouldn’t be talking about how she’s so over Antonio that she lazily slapped some pancake make-up on his name inked into her arm. But you know, Melanie didn’t have to bother covering that mess up. Because most people don’t even notice it since they’re too busy screaming, “FOR WHY? For why did she make her face look like a melting puppet sucking on a lemon?” 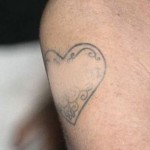 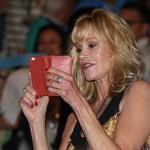 Tags: Antonio Banderas, Eva LongWHORIA, I See You Bitch, Melanie Griffith
SHARE
Our commenting rules: Don't be racist or bigoted, or get into long-ass fights, or go way off topic when not in an Open Post. Also, promoting adblockers, your website, or your forum is not allowed. And some comment threads will be pre-moderated, so it may take a second for your comment to show up if it's approved.
src="https://c.statcounter.com/922697/0/f674ac4a/1/"
alt="drupal analytics" >