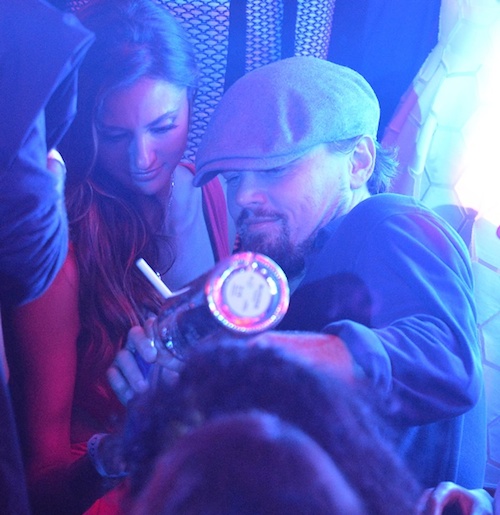 If your b-hole is still recovering from the warm tingles it got after hearing about Leonardo DiCaprio refusing to share the same air with the Keeping Up With The Kardashians kamera krew at a party two weeks ago, then you better stop reading right now, because this story will make you feel like you sat on a dildo made of Extra Strength Icy Hot. Star says that while he was in Cannes last month, Leo decided to catch some hos at Gotha nightclub (don’t get excited; I checked, and, no, it’s not a Gothika-themed nightclub). As it so happened, the toilet-clogging used tampon of Canada Justin Bieber was also in the same club, most likely searching for someone to warm his bottle and read Goodnight Moon.

According to a source (hey Lukas Haas!) a shirtless Justin spotted Leo from across the room and had his bodyguard push through the crowd to get to where Leo was sitting with his harem of bony 20-year-old models in the VIP area. Justin’s bodyguard (the toughest 4th grader he knows) then asked Leo if he’d be interested in pulling up a highchair and letting Baby Bieber join him at his table. Of course, Leo would rather fuck an underwear model from the Sears catalogue than spend two seconds with Vanilla Ice Cream Cone, so he shook his head “OF COURSE NOT, BITCH” and shooed his bodyguard away. In case you didn’t glean that Leo has as much use for a Bieber as he does a Kardashian, the source says this:

As if. The real reason Leo didn’t want that swaggy tonsil stone around is because that greedy pussy-hoarder was afraid Justin would swoop in with his sessy dirt stache and snatch up one of his beloved Victoria’s Secret Angels, forcing Leo to sleep on a bed of 7 naked models instead of his regular 8 that evening. Even though they only weight about 90 lbs each, if one of his pretty panty hustlers is missing from the pile, he has to re-arrange them all and move the blonde one from the bottom and the other blonde one to the middle, and it’s impossible for him to get a good night’s sleep if he’s playing Pussy Tetris all night long.

Tags: Denied!, HAHA On You, Justin Bieber, Leonardo DiCaprio
SHARE
Our commenting rules: Don't be racist or bigoted, or get into long-ass fights, or go way off topic when not in an Open Post. Also, promoting adblockers is not allowed. And some comment threads will be pre-moderated, so it may take a second for your comment to show up if it's approved.
src="https://c.statcounter.com/922697/0/f674ac4a/1/"
alt="drupal analytics" >