No One Puts Basement Baby In The Corner Of An Elevator: Solange Goes Crazy On Jay-Z (UPDATE)

And now we know that Jay-Z’s got 99 problems and Basement Baby is all of them.

TMZ posted an ESCANDALO video of Basement Baby re-enacting the Tina Turner limo scene from What’s Love Got To Do With It? in an elevator at The Standard Hotel in NYC after the Met Gala last week. A millisecond after Beyonce, Jay-Z and Basement Baby get into the elevator, BB burns Beyonce’s weave glue by kicking, punching and losing her mind on Jay-Z. I  know, it’s weird seeing a woman whoop Jay-Z’s ass for a change. A big ass bodyguard tries to hold Basement Baby back, but when he you take Basement Baby out of the basement she goes nuts and he can’t control her ass. Meanwhile, BeyonceBot just stands there like, “I’m not about to fuck up my makeup, nails, dress and weave over this shit.” Jay-Z must’ve turned her off before they got into the elevator, because bitch barely blinks while her sister goes full “Sharon Stone in Casino” on Jay-Z’s ass.

TMZ also points out that the bodyguard hits the emergency break so the doors won’t open up and give everyone a Basement Baby Beat Down Show. TMZ doesn’t say what went down, but I’m guessing Jay-Z told her she looked like a Fraggle Rock Diana Ross.

Surprisingly, BeyonceBot didn’t hit the basement button on the elevator and tell Basement Baby, “This is your stop.” They all came out of the hotel together and while BeyonceBot put on a manufactured fake ass smile while getting into a car with Jay-Z, Basement Baby had the look of rage in her eyes as she got into a different car. This is what happens when Basement Baby leaves the basement and I love it.

UPDATE: TMZ has an extended cut version, because of course they do. Three full minutes of THE RAGE OF BASEMENT BABY including her shit flying everywhere when she throws her purse at him. There goes her allowance for the month.

All together now, “Hate in an elevator, livin’ it up while Jay-Z’s doing down!” 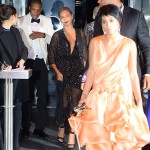 Tags: Beyonce, Jay-Z, SCANDAL, Solange, The Drama Of It All
SHARE
Our commenting rules: Don't be racist or bigoted, or get into long-ass fights, or go way off topic when not in an Open Post. Also, promoting adblockers, your website, or your forum is not allowed. And some comment threads will be pre-moderated, so it may take a second for your comment to show up if it's approved.
src="https://c.statcounter.com/922697/0/f674ac4a/1/"
alt="drupal analytics" >