When it was announced that George Clooney had slipped a giant Frosted Mini-Wheat of a diamond onto the hitchin’ finger of Amal Alamuddin, it felt like he could have paced himself a bit. After all, a high-profile showmance is a marathon, not a sprint; you need at least 18 months to go from being “caught” by the paps holding hands to walking down the red carpet at the Oscars to having your publicist leak a pregnancy story to finishing with an “amicable” split.

But according to – who else – People, George kept the publicity train chugging full-steam ahead (he must need a couple extra bucks to re-tile the roof of his Italian villa) by throwing an engagement party on Sunday at Cafe Habana in Malibu. In attendance were his BFF Rande Gerber, Cindy Crawford, and Bono and The Edge from U2, who celebrated by toasting with tequila and singing karaoke on the patio. BREAKING NEWS: I think that was the first time tequila and karaoke ever sounded boring.

I honestly thought that ring would be followed by 2 years of “We haven’t set a date yet! We’re so busy!” but it appears Clooney is really committed to making this engagement seem legit. Then again, he could be in too deep and he’s panicking. I saw an episode of Dr. Phil recently where a woman faked a pregnancy for attention, but kept the lie going by faking contractions, checking in to a hospital, and pulling pictures off the internet to use in a birth announcement. That could be Clooney right now! “Oh shit! Shit shit shit, what have I done? I never should have bought a ring! This is totally going to end in a wedding, I know it! Oh god, I’m so fucked.”

Here’s more of George and Amal (Gamal? Amorge? Who cares? Exactly) arriving at their engagement party. I’d like to direct a question to Amal. That tiny pink bow on your shirt: what are we trying to do there? 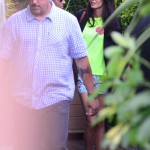 Tags: Amal Alamuddin, George Clooney
SHARE
Our commenting rules: Don't be racist or bigoted, or get into long-ass fights, or go way off topic when not in an Open Post. Also, promoting adblockers, your website, or your forum is not allowed. And some comment threads will be pre-moderated, so it may take a second for your comment to show up if it's approved.
src="https://c.statcounter.com/922697/0/f674ac4a/1/"
alt="drupal analytics" >