Open Post: Hosted By Beyoncé And Jay Z At The Nets Game TIME Magazine’s Most Influential Creature Her Majesty Beyoncé (and also her husband Jay Z) decided to do some early promotional work for their upcoming “On The Run” tour by attending the Brooklyn Nets game at the Barclays Centre Friday night and treating everyone in attendance to some perfect couple realness. Blue Ivy fetched a pair of rolled-up jeans and a white t-shirt from the Casual Closet and personally hand-tousled a wig to give it that ‘just hangin’ with my man’ look in order for Beyoncé to really sell the image that she just can’t wait to go on tour with Jay Z and share the stage with someone else and that she’s totally ok that they have equal billing on the tour’s artwork and that it’s called “On The Run” and not “BEYONCÉ!!!…and also Jay Z”. No, that’s fine! It‘s great! It’s so SO great! Easy there Bey, the laughing might be laying it on a little thick.

Here’s more of BEYONCÉ (and also Jay Z) working those court-side seats like the best corner on the ho stroll. And if you’ve ever wondered what Bey looks like when she’s forced to interact with Kim Kardashian, please check out the shade she’s throwing in the first picture. You gotta give credit where credit’s due; there isn’t a bitch alive who can throw a Bitch, NO face as well as Beyoncé Knowles. 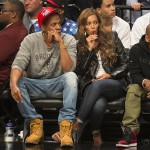 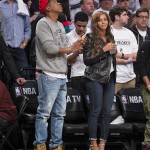 Tags: Beyonce, Jay-Z, Open Post
SHARE
Our commenting rules are pretty simple: Don't be racist or bigoted, or go way off topic when not in an Open Post. If you see an offensive or spammy comment you think should be deleted, flag it for the mods and they'll be forever grateful and give you their first born (although, you probably don't want that).
src="https://c.statcounter.com/922697/0/f674ac4a/1/"
alt="drupal analytics" >