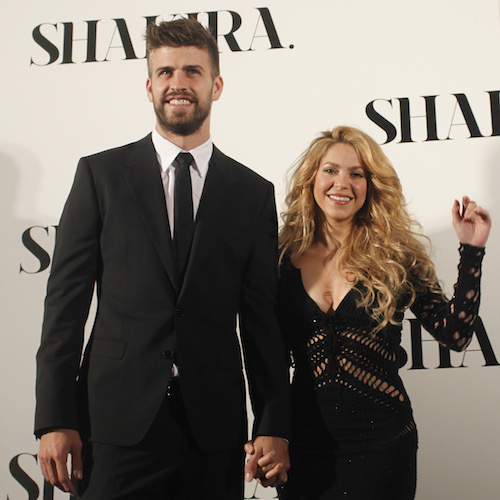 Ever since Shakira set off a million alarms and raised a billion red flags when she said in an interview that her boyfriend, Gerard Piqué, “no longer lets her” film music videos with other dudes, I’ve been not-so-secretly hoping that Iyanla would step in, sit her down, and fix her life. But Iyanla is currently on retainer in case Oprah needs help fixing the most unfixable life, which is no good, because Shakira keeps telling us more about that Mary J. Blige song she calls a relationship and she’s not watching the numerous copies of Sleeping with the Enemy we’ve sent her.

During the release party for her new self-titled album (which I was surprised wasn’t titled ‘Gerard Piqué’s Woman’), Shakira tried to clarify to E! News those statements that painted her boyfriend as a possessive, controlling, jealous asshole. Ah, damage control; my favorite of the controls (sorry Janet):

“I have rules, too. It’s two sides, you know. He can’t do stuff with models either!”

Yeah okay. Where I come from, that’s just called “not cheating”. But then Shakira said something that sounds like the IMDB description of the movie Fear:

“We’re one of those asphyxiating couples, smothering each other all the time. It’s good when your man’s protective of you. He’s a defender. He defends the goal. That is his job, so he knows how to do that well.”

Now, I’m no expert, but if you’re in a healthy relationship, you usually don’t describe your partner using murder words like ‘smothering’ or ‘asphyxiating’, right? Every time Shakira is asked about Gerard, her answers sound like dialogue that’s written for a victim on Law & Order: SVU. Attention, Shakira: I don’t want to see you explaining to Detective Olivia Benson why Gerard took away your phone (“He doesn’t like knowing other men are texting me!”), is making you wear a GPS (“He always wants to know where I am!”), and why he no longer allows you to speak unless spoken to (“He’s so protective of my vocal cords!”).

Tags: Oh No, Shakira, This Is Not Going To End Well
SHARE
Our commenting rules: Don't be racist or bigoted, or get into long-ass fights, or go way off topic when not in an Open Post. Also, promoting adblockers is not allowed. And some comment threads will be pre-moderated, so it may take a second for your comment to show up if it's approved.
src="https://c.statcounter.com/922697/0/f674ac4a/1/"
alt="drupal analytics" >