The “Wisdom” Of Jenny McCarthy Is Spreading: Kristin Cavallari And Jay Cutler Won’t Vaccinate Their Kids 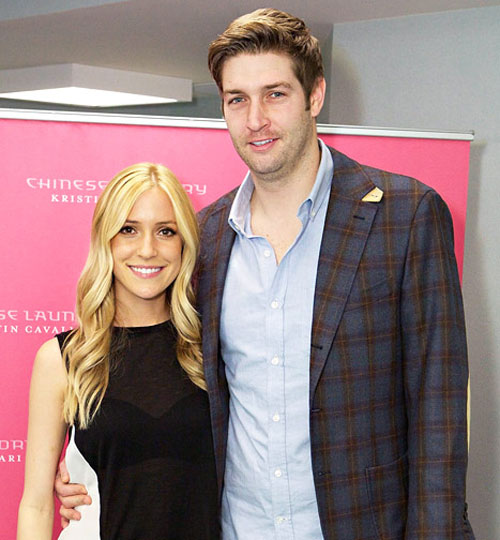 For those of you parents out there who haven’t made a decision on whether or not to vaccinate your kids, because you’ve been waiting to hear what that trick from The Hills whose last name sounds like an appetizer on the Red Lobster menu has to say about it, you don’t have to wait any longer. She’s finally spoken! Kristin Calamari was on Fox Business’ The Independents to pimp out her style show for E! and her shoe line for Chinese Laundry and the subject of vaccinations came up, because the subject of vaccinations always comes up when a trick is talking about her style show and shoe line. The host of The Independents, Kennedy (yes, that Kennedy), brought up vaccines and Kristin let it be known that the son she has now and the son she’s pregnant with will never be vaccinated. Kristin doesn’t want them to get autism and when Kennedy let her know that there’s no link between autism and vaccines, she said that she read a lot of books and saw it on Homeland or something. Basically, Kristin Cavallari knows stuff! I mean, who cares that polio and the measles are making a comeback?!

Kennedy: Are you opposed to vaccines?

Kennedy: Really? You’re one of those (Ed note: I’m not sure what the hell Kennedy says here, but I think she says “communists“)?

Kristin: I’ve read too many books about autism and the studies.

Kennedy: No, no, there’s no links. Read the links that say autism and vaccines have no-

Kristin: Well, there is a pediatric group called Homestead, Homestead or Homefirst, now I have pregnancy brain I got them confused—they’ve never vaccinated any of their children, and they haven’t had one case of autism. And now one in 88 boys is autistic, which is a really scary statistic.

Kennedy: Well, my mom vaccinated us and she doesn’t have any cases of autism either. Isn’t that weird?

Kristin: The vaccinations have changed over the years, there’s more mercury and other…

Kennedy didn’t ask what Jay Cutler’s thoughts on vaccines are, but I’m sure if you asked him, he’d stare at you blankly for a full 15 seconds and after a stream of drool dribbled out of the corner of his mouth, his brain would turn back on again and he’d ask you to pull his finger.

And yeah, by “read too many books,” Kristin means that she read one of Jenny McCarthy’s statuses on Facebook or some shit.

Tags: Dumbasses, Jenny McCarthy, Kristin Cavallariwhatever
SHARE
Our commenting rules: Don't be racist or bigoted, or post comments like "Who cares?", or have multiple accounts, or repost a comment that was deleted by a mod, or post NSFW pics/videos/GIFs, or go off topic when not in an Open Post, or post paparazzi/event/red carpet pics from photo agencies due to copyright infringement issues. Also, promoting adblockers, your website, or your forum is not allowed. Breaking a rule may result in your Disqus account getting permanently or temporarily banned. New commenters must go through a period of pre-moderation. And some posts may be pre-moderated so it could take a minute for your comment to appear if it's approved. If you have a question or an issue with comments, email: [email protected]
src="https://c.statcounter.com/922697/0/f674ac4a/1/"
alt="drupal analytics" >