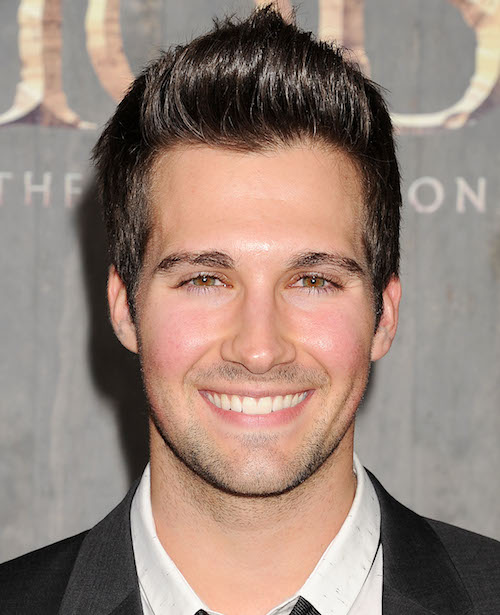 The first time I was made aware of James Maslow’s exquisite Stepford Pool Boy face in all its Maybelline glory, I thought “This kid and his beautiful rosy cheek implants are going places”. I didn’t know what place that would be (a believable testimonial in a no!no! commercial, a WeHo Zumba class) but I knew it would be big! Or at least big adjacent. And apparently the producers of Dancing With The Stars (and Star-Type Substitutes) agreed, because James Maslow will be batting dem eyelashes and smizing the shit out of the cha-cha-cha as a contestant on ABC’s Sequins & Spanx Variety Hour.

The complete cast of DWTS was revealed today, and there’s very little to get excited about (beside’s imagining the FACE-BODY-FACE James Maslow will be bringing to the dance floor every week). Because this is ~very~ important information, here’s who will be stuffing themselves into 10 yards of stretch satin every week:

I may be jumping the gun a bit, but I’m just going to go ahead and recommend that the DWTS interns not buy any green bananas for the 64-year-old swimming enthusiast’s dressing room. If our definition of ‘star’ now includes an oldie who was insane enough to swim from Cuba to Florida, then DWTS producers might also be interested in my friend’s drunk Aunt Pam who got arrested after jumping off a booze cruise and swimming to shore in nothing but a Juicy Couture velour hoodie.

And was Kimmy Gibbler is too busy preparing for a research trip to Mars or rescuing orphans in Romania? Because there’s no way DWTS would purposely overlook her for D.J. Tanner. Everyone knows that when it comes to Full House, why go out for lukewarm cheeseburgers (D.J. Tanner, Uncle Joey, the less-present of Aunt Becky’s twins) when you have steak at home (Kimmy Gibbler, Uncle Jesse).

Tags: Candace Cameron Bure, Dancing With The Has-Beens, Excuse My Beauty, NeNe Leakes
SHARE
Our commenting rules: Don't be racist or bigoted, or get into long-ass fights, or go way off topic when not in an Open Post. Also, promoting adblockers is not allowed. And some comment threads will be pre-moderated, so it may take a second for your comment to show up if it's approved.
src="https://c.statcounter.com/922697/0/f674ac4a/1/"
alt="drupal analytics" >