America’s Sweetheart Jennifer Lawrence Fell On The Oscars Red Carpet, Because Of Course She Did

Very early this morning at a studio in North Hollywood, Jennifer Lawrence and her team of choreographers worked for hours upon hours on perfecting her choreographed and staged Oscars red carpet fall. I mean… Jennifer Lawrence once again tripped and fell after showing up to the Oscars tonight. I would scream, “THAT STUNT QUEEN WILL STOP AT NOTHING TO MAKE US ALL THINK SHE’S SO RILL,” but then the US government would declare me an enemy of the country and deport half of me back to El Salvador and the other half of me back to Japan. So I’ll just say that Jennifer Lawrence is so quirky and so klutzy and so one of us. And since she fell last year and already fell tonight, I wonder what she will do if she wins over Lupita Nyong’o tonight? She’ll probably shit and piss her dress. She’s got a bottle full of watered down lemonade and a half-melted bag of Snickers shoved up her dress just in case she wins. 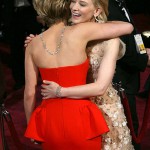 Tags: 2014 Oscars, Jennifer Lawrence, Stunt Queens
SHARE
Our commenting rules: Don't be racist or bigoted, or get into long-ass fights, or go way off topic when not in an Open Post. Also, promoting adblockers is not allowed. And some comment threads will be pre-moderated, so it may take a second for your comment to show up if it's approved.
src="https://c.statcounter.com/922697/0/f674ac4a/1/"
alt="drupal analytics" >