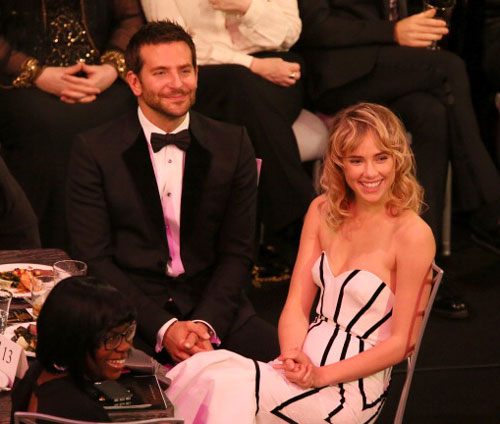 Bradley Cooper brought Suki Waterhouse to the SAG Awards and he really should’ve pruned his beard as perfectly as he pruned the beard on his face, because that child’s hair “half-assed prom curls deflating in humidity” hair is a true tragedy – Lainey Gossip

If you want to be 100% right about something at least once a day, then wake up every morning and tell yourself, “I’m going to see brand new pictures of RiRi in a bikini” – Drunken Stepfather

Let me correct the statement above: Tell yourself, “I’m going to see at least TWO brand new sets of pictures of RiRi in a bikini” – The Superficial

As I looked at these delicate, demure flowers from the AVN Awards, I asked myself, “I wonder which one of these dresses June Squibb is going to wear to the Oscars?” – Hollywood Tuna

FAKE! I refuse to believe that The Lesbeaver spells “you’re” right – Jezebel

And the pregnant nun was Salvadoran. El Salvador is representing RIGHT as always! – OMG Blog

You know, I would totally pay to see an actual bowl of tapioca pudding play Dan Akroyd – Pajiba

Kelly Clarkson is having a girl – HuffPo

Jerry Ferrara’s hairy nipples, because why not – Just Jared

Let A Ho Be A Ho: Robin Thicke touches lips with a barely legal-looking girl with Scary Spice circa 1995 hair – Popsugar