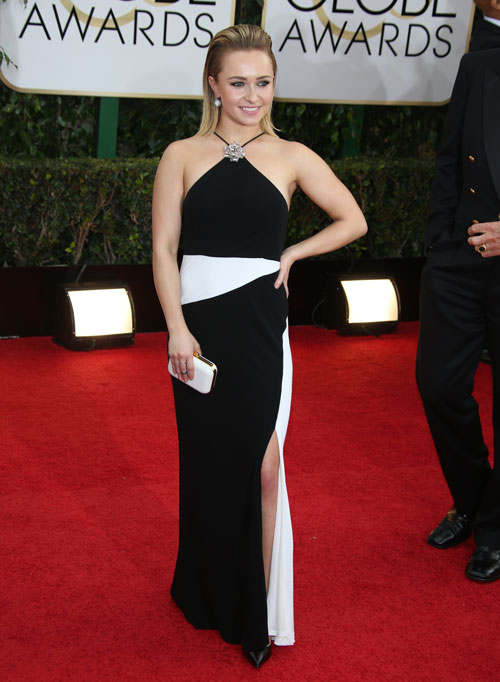 On January 12, 2014, a Canadian mom had her son arrested for stealing $10 from a piggy bank, a piece of trash was arrested for leaving her 12-year-old on the side of the road and I ate a plain slice of raisin bread with no butter, jam, Nutella or any other kind of delicious lubricant (nasty, I know). All of those are ILLEGAL acts, but the worst ILLEGAL act committed that night was committed by Keebler Elf pin-up, Hayden Panettiere. Hayden showed up to the Golden Globes in a Tom Ford dress she bought off the rack!!!!!!!!!! As the entire fashion industry lines up to file a police report against this criminal troll, I’m sitting here shocked and surprised at the newfound fact that Tom Ford makes a line of toddler gowns for Gymboree.

The whole award-show-gown thing is a pile of snobbiness and ridiculousness. Fancy designers lend fancy gowns to the celebwhores they want to lend fancy gowns to and some make custom-made fancy gowns for celebwhores they want to make fancy gowns for. Most celebrities don’t buy their dresses. Before the Golden Globes, Tom Ford said that he dressed only one woman that night and that woman was Naomi Watts. So when Hayden told reporters that she was wearing Tom Ford and she’s been begging to wear one of his dresses for years, fashion journalists freaked out. Fashion journalist Jim Shi asked Tom Ford’s people about the dress and when he got his answer, he threw all the side-eyes at Hayden:

I don’t know if that “tsk tsk” is directed at Hayden for wearing a dress without a permission slip from Tom Ford or for acting like Tom Ford personally dressed her by saying she begged for it. I don’t know, but this is the biggest fashion ESCANDALO since Kanye West’s design for leather jogging pants got shot down, and a day after Hayden was called out, she tweeted a picture of the roses and thank you note that Tom’s assistant sent her:

Such an honor to wear one of this man's masterpieces! Thank you for my beautiful flowers! #TomFord pic.twitter.com/znzecGF454

What’s really offensive about all of this is that Hayden paid $10,000 for a dress that looks like it came from Santee Alley. And Hayden paid $10k for a dress that she had to chop in half to fit her. The only way it’s okay to spend $10,000 on that dress is if Tom Ford personally puts it on your naked body after eating your ass out, jacking you off and letting you watch him slowly sip cognac from a crystal glass while petting a white cat. You know that’s a sight!

Tags: 2014 Golden Globes, Hayden Panettiere, SCANDAL, The "Who Cares?" News, Tom Ford
SHARE
Our commenting rules: Don't be racist or bigoted, or post comments like "Who cares?", or have multiple accounts, or repost a comment that was deleted by a mod, or post NSFW pics/videos/GIFs, or go off topic when not in an Open Post, or post paparazzi/event/red carpet pics from photo agencies due to copyright infringement issues. Also, promoting adblockers, your website, or your forum is not allowed. Breaking a rule may result in your Disqus account getting permanently or temporarily banned. New commenters must go through a period of pre-moderation. And some posts may be pre-moderated so it could take a minute for your comment to appear if it's approved. If you have a question or an issue with comments, email: [email protected]
src="https://c.statcounter.com/922697/0/f674ac4a/1/"
alt="drupal analytics" >