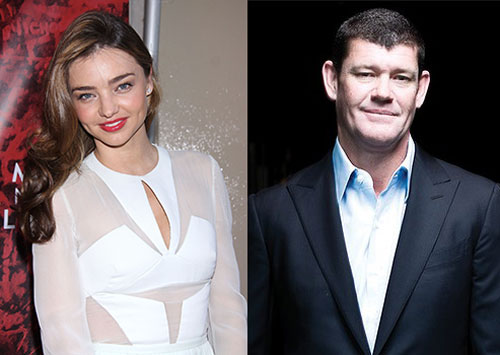 James is also going through some divorce shit with his wife of 6 years and the mother of his three kids. James and his wife Erica broke up barely three months ago. A source says that James and Miranda have only started dating recently, but they’ve known each other for a while  and their families have gone on vacations together. Miranda, Orlando and their kid Flynn spent some time in Tahiti with the Packers last year. James Packer’s spokeswhore wouldn’t say shit about this.

James Packer is somewhat of a star fucker and he became a Scientologist after he got friendly with Tommy Girl. He quit Scientology in 2005 after his dad died.

Miranda Kerr’s checking account is filled to the top with millions of dollars, but why fly first class to some island for vacation when you can fly on your private drone to a private island your billionaire boyfriend bought your ass? Yes, Orlando Bloom’s face is so pretty that you just want to sit on it, but James Packer’s face becomes sort of pretty when you picture it as a giant, gold, sparkly dollar sign. Blow a goodbye air kiss at Orlando’s pretty face and climb that ladder, you shameless bitch.

Here’s Miranda, Orlando and their kid in NYC a few nights ago. Tags: Gold Diggers, Miranda Kerr, Orlando Bloom, Yeah Okay
SHARE
Our commenting rules: Don't be racist or bigoted, or post comments like "Who cares?", or have multiple accounts, or repost a comment that was deleted by a mod, or post NSFW pics/videos/GIFs, or go off topic when not in an Open Post, or post paparazzi/event/red carpet pics from photo agencies due to copyright infringement issues. Also, promoting adblockers, your website, or your forum is not allowed. Breaking a rule may result in your Disqus account getting permanently or temporarily banned. New commenters must go through a period of pre-moderation. And some posts may be pre-moderated so it could take a minute for your comment to appear if it's approved. If you have a question or an issue with comments, email: [email protected]
src="https://c.statcounter.com/922697/0/f674ac4a/1/"
alt="drupal analytics" >