Alfre Woodard’s face says everything. All that NOT IMPRESSED shade being thrown leads me to believe she has some kind of cringe-based Final Destination 6th sense that tells her when someone’s about to massively fuck up. It’s like she’s looking at the person uploading this picture to Instagram and telepathically telling them: “I’m not Tyler Perry, either. Try again, bitch.”

Armani posted several pictures of highfalutin celebrity types wearing Armani gowns and suits at the 5th Annual Governor’s Awards on Saturday night to their Instagram account, one of which was award-winning actress Alfre Woodard. When it came time to caption the picture, I guess someone drew a blank on who she was, and instead of getting their dumb asses to Google, they named her Idris Elba and called it a day. In case you’re not familiar, this is Idris Elba: Exactly. Someone at Armani was playing the Amy Adams/Isla Fisher game, but with a woman and a man.  On a sliding scale between Not That Bad and Are You Fucking Joking?, we’re all about here, right?

A few Instagram commenters think we should give whomever is running the Armani Instagram account a break, since it’s probably a 20-year-old unpaid intern who doesn’t know their ass from a hole in the ground, and like, maybe 10% of me agrees? I mean, it took my 5th viewing of that PlayStation ‘Perfect Day’ commercial to realize I couldn’t tell two 30-year-old white dudes apart (I thought it was one guy talking to himself; the commercial made literally no goddamned sense to me). But that’s fucking apples and oranges: confusing an Award-winning old lady actress with a drug dealer from The Wire, and my dumb drunk ass confusing two no-name white guys in a 30-second Gameboy commercial is not the same thing.

Armani noticed their mistake after thousands of comments brought it to their attention and now the picture is rightfully captioned as Alfre Woodard, but that hasn’t stopped the good people of Twitter from beating the hell out of this joke by creating the hashtag #armanicaptions. Here are some of my favourites (I’m sending an engagement ring over to the person who made the Noxeema Jackson one with a note that says MARRY ME PLS as we speak): 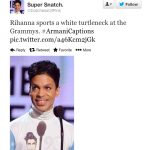 Tags: I Think You're Confused, Whoopsies
SHARE
Our commenting rules: Don't be racist or bigoted, or get into long-ass fights, or go way off topic when not in an Open Post. Also, promoting adblockers is not allowed. And some comment threads will be pre-moderated, so it may take a second for your comment to show up if it's approved.
src="https://c.statcounter.com/922697/0/f674ac4a/1/"
alt="drupal analytics" >