Is The Bad Shit The Reason Why The Jonas Brothers Killed Their Tour? 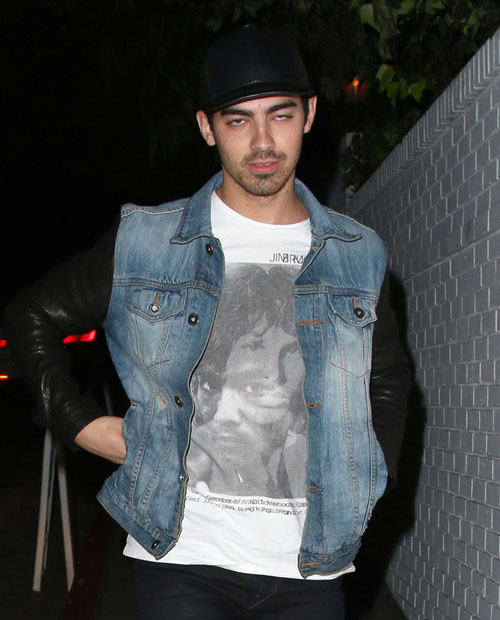 When the Jonas Brothers’ manager dried up the coochies of their fans by announcing that their 19-date tour wasn’t going to happen, many of us figured it was because they didn’t want to play to venues as empty as Kevin Jonas’ stomach after he throws everything up from seeing his wife’s bare twat. The JoBros’ manager blamed the tour’s cancellation on the brothers fighting over which direction their music should go. But for the past few days, Joe Jonas has been seen with a dude who is a known addiction specialist and helped Demi Lovato dry up.

TMZ says the dude’s name is Mike Bayer and he’s the founder and CEO of Cast Recovery Services. Last night in L.A., Mike, Joe and Kevin left Lindsay Lohan’s rehab facility of choice, Chateau Marmont, together. Blind Gossip claims that the bad shit is fucking with Joe’s life and during the past year he’s been skipping after the dragon by doing heroin with his girlfriend Blanda Eggenschwiler. (Warning: If you happen to be reading this at a German restaurant, don’t say that name out loud unless you want to order the brunch special.)

A source told Blind Gossip that Joe’s dad knows about his problem with heroin, but doesn’t want him to go to rehab, because he’s afraid that it will ruin the group’s “wholesome” image and fans will turn against them. Joe finally went against his daddy’s wishes and told him he was taking his ass to rehab. The group’s team spun it to make it look like they were canceling the tour due to “creative differences.”

Daddy Jonas must be snorting, smoking, injecting, fucking, sucking, eating and swallowing heroin himself if he thinks that his little money makers still have a wholesome image and that fans would be surprised by this. You’re in the minority if you were part of the Disney whore machine and weren’t a total mess at least once in your life. Drug dealers regularly watch the Disney Channel to get to know their future clients. Disney fucks kids up and all of us have known that for centuries.

And if Joe isn’t addicted to the bad shit, he has a funny way of shooting down the rumors. Because coming out of Chateau Marmont with strung out eyes and a Jim Morrison t-shirt on your body is one way to say, “I love drugs!” Tags: Bad Shit, Joe Jonas, Jonas Brothers, Kevin Jonas, Nick Jonas
SHARE
Our commenting rules: Don't be racist or bigoted, or get into long-ass fights, or go way off topic when not in an Open Post. Also, promoting adblockers is not allowed. And some comment threads will be pre-moderated, so it may take a second for your comment to show up if it's approved.
src="https://c.statcounter.com/922697/0/f674ac4a/1/"
alt="drupal analytics" >