Typing the phrase “Twitter ultimatum” just made me barf through the pores on my fingers.

Last night, Miley Cyrus made Billy Ray Cyrus shake right out of his raccoon mullet when she threatened to EXPOSE him on Twitter. I love it when a bitch threatens to EXPOSE another bitch in an hour or less, but it’s not as dramatic when it’s done in all lower caps…. on Twitter. Anyway, Miley tweeted the threat along with a picture of her next to a woman who at first I thought was a ginger Heidi Montag with her original face on. A quick minute after Miley threw that threat up on Twitter, she deleted it and then tweeted out this bullshit: “Wtf? My twitter was just actin all types of cray!”

Don’t you just hate it when your Twitter acts all types of cray by magically writing a tweet you wrote and magically uploading a picture that you uploaded and magically tweeting a tweet after you hit the tweet button? I hate it when my Twitter acts cray like that. Since Miley is a celebwhore, she could blame her tweet regret on one of three things: 1. her Twitter was acting cray, 2. she was hacked or 3. she was suffering from severe exhaustion and didn’t know what she was tweeting. I’m sure that Miley will announce that her Twitter is checking into a rehab tweetment center to be treated for the cray-ness it suffers from.

But more importantly, WHAT DOES MILEY’S FIRST TWEET MEAN?

Billy Ray Cyrus filed for divorce from Tish Cyrus three years ago, but then he pressed paused on the divorce because he was trying to work things out with her. Things didn’t work out because Tish filed for divorce a couple of weeks ago. But then, Tish and Billy Ray were papped on Sunday leaving a restaurant arm-in-arm, which isn’t surprising since not much can break the love between a sad-eyed anime horse and a humanized roadkill possum.

But now they’re love might really be broken thanks to his wandering dick. An ONTD commenter says that the woman next to Miley in that picture is Broadway actress, singer and dancer Dylis Croman. Dylis played Mona and covered the role of Roxie Hart in the Broadway production of Chicago when Billy Ray was in it last year. So that picture is Miley’s subtle way of saying that Billy Ray passed his hillbilly peen to Dylis while he was with Tish. I was going to ask for more proof, but then I looked closer at that picture. That’s not fake fur on Dylis’ jacket. Those are Billy Ray’s highlighted pubes! Poor Tish (not really). Her sad anime horse eyes just got sadder. 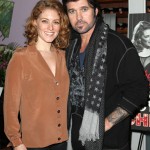 Tags: Billy Ray Cyrus, Miley Cyrus, SCANDAL, Tish Cyrus, Trash, Well Well Well
SHARE
Our commenting rules: Don't be racist or bigoted, or post comments like "Who cares?", or have multiple accounts, or repost a comment that was deleted by a mod, or post NSFW pics/videos/GIFs, or go off topic when not in an Open Post, or post paparazzi/event/red carpet pics from photo agencies due to copyright infringement issues. Also, promoting adblockers, your website, or your forum is not allowed. Breaking a rule may result in your Disqus account getting permanently or temporarily banned. New commenters must go through a period of pre-moderation. And some posts may be pre-moderated so it could take a minute for your comment to appear if it's approved. If you have a question or an issue with comments, email: [email protected]
src="https://c.statcounter.com/922697/0/f674ac4a/1/"
alt="drupal analytics" >