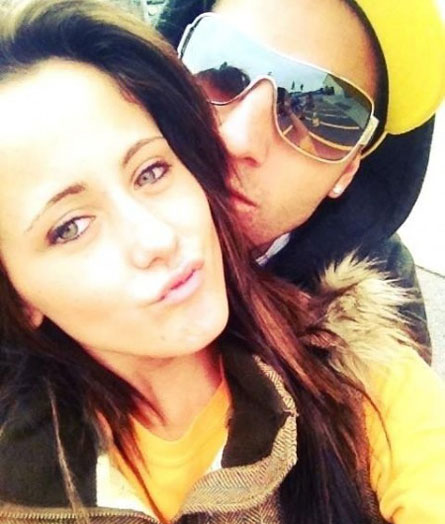 Let’s all stick an e.p.t. test up our asses, because the odds say that we’re all having babies. Babies are happening to everyone! Elton John has a baby, Jeremy Renner is going to have a baby and in the most terrifying baby news of all, Star (via Radar) says that Teen Mom Jenelle Evans is knocked all the way up with a kid who she’ll see every other weekend (depending on whether or not she’s got ¢hur¢h aka a Ke$ha concert that weekend).

In around 8 months, Child Protective Services will get another file on their desks when 21-year-old Jenelle Evans of Teen Mom 2 births out her second kid. Jenelle’s husband of a few weeks, Courtland Rogers, tells Star that CPS’ sweetheart is around 6 weeks pregnant and since she doesn’t have custody of her first kid, Jace Evans, she’s hoping she can prove she’s not a piece of shit parent by raising her second kid right. There’s nothing more precious than having a do over baby. Jenelle just got out of rehab for heroin addiction, so this is perfect time for her to be knocked up. Courtland tells Star:

“Me and Jenelle are so happy that she’s pregnant. She told me, ‘I’m looking forward to a second chance.’ She thinks if she can prove that she’s a good mother, she can get Jace back.”

When Star asked Jenelle’s 59-year-old mother for a comment, she said (no, she didn’t), “I was thrilled to find out that my accidental surrogate is pregnant with another baby for me to raise. Retirement is overrated! I am so happy that Jenelle gets to have all the fuck time fun in making a baby while I’m the one who gets to raise it. I am seriously OVER THE MOON! No, seriously, throw me over the moon, please.”

And this goes without typing, but yes, there will soon be a baby on this planet whose name is Ke$ha. Ke$ho if it’s a boy.

Tags: BABIES!!!, CPS Is On Line One, Duggars, Just Stop, Teen Mom
SHARE
Our commenting rules: Don't be racist or bigoted, or post comments like "Who cares?", or have multiple accounts, or repost a comment that was deleted by a mod, or post NSFW pics/videos/GIFs, or go off topic when not in an Open Post, or post paparazzi/event/red carpet pics from photo agencies due to copyright infringement issues. Also, promoting adblockers, your website, or your forum is not allowed. Breaking a rule may result in your Disqus account getting permanently or temporarily banned. New commenters must go through a period of pre-moderation. And some posts may be pre-moderated so it could take a minute for your comment to appear if it's approved. If you have a question or an issue with comments, email: [email protected]
src="https://c.statcounter.com/922697/0/f674ac4a/1/"
alt="drupal analytics" >